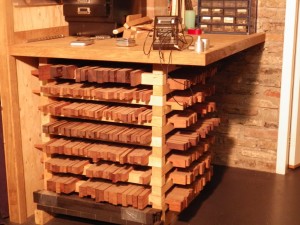 Looking at a piece of Pernambuco wood we are in the same situation as with a finished bow. We need to be careful in our judgment. All the real masters of our trade have been amazingly careful with their judgments. I have changed my mind about the same bow so many times that I do not trust my own judgment very much.

But as bowmakers we have to decide which stick we want to use for the next bow, so we somehow have to be able to choose a stick and have an idea what to expect from it.

Let me start with an old story.

Some time ago, I bought Pernambuco from a famous violinmaker who had travelled to Brazil and bought a large quantity of Pernambuco beams. He expected the price to go up quickly but that didn’t happen then. Maybe now it would be different.

Anyway, he had the wood stored in his vacation house and was trying to sell it. A Japanese client showed interest. The violinmaker had a ton of his wood brought from his vacation house to his own home. A couple of days later, early in the morning, a big truck dumped the whole pile in front of his house. The violinmaker had to drag it all to his backyard. When the Japanese client showed up, he had a short look at it and declined with thanks.

Then I stepped in. When I showed interest in buying the Pernambuco, the violinmaker seemed quite relieved. I recruited two bow-making partners and we ended up buying the whole ton for a very fair price.

Now, the three of us had to share the wood as fairly as possible among ourselves. The pieces we had bought were all beams of about 10 x 20 x 150 cm. Most of them were pretty dark in color, so that we couldn’t see much of the wood. We knew there were beams of all ages, some of them were 10 years old, which is quite fresh, others were 40 years old and some were even 100 years old. But we didn’t know which were the old ones.

Age is hard to estimate with Pernambuco. Most people tend to associate age, automatically, with a dark color and that leads to a wrong presumption. Stored in a dark dry place, Pernambuco can keep a bright color for a hundred of years. But, in a humid place it turns dark in a couple of months. Some dealers do that on purpose or they fume them in ammonia for some time causing most of the wood to become very dark.

At any rate, the modified dark color is only seen on the outside. Once 2 mm or more of wood is planed off, we see the original color.

The dark color doesn’t make a good bow, but it is easier to make a bow look good if the wood is a dark brown or a deep red, rather than a yellow stick.

A better indication of age is the number of cracks in the wood. Old wood usually has a lot of cracks, which is only a very rough indication, because it depends a lot on how the wood has been stored.

To make it even more difficult, it is impossible to judge a beam as a whole. Once it is sawed into planks or sticks, the difference between them is so big you would never believe that they came from the same beam.

For those reasons the three of us decided to ignore age estimate and color altogether.

We decided to saw all of the beams into planks and divide them up in planks.

We found a deeply religious carpenter who allowed us to use his machines (if only we wouldn’t curse). That was a deal. First, we planed the beams all around to see how the grain ran, see where the cracks and branches were.

We tried to make quarter cuts where possible. A quarter cut prevents a bow head from breaking and is therefore preferable to a slab cut.

At that point we had to decide if we would saw thin planks for violin and viola or thicker ones for cello and double bass. In general, the violin bow requires wood with the straightest grain and the highest elasticity. A violin bow is about half the diameter of a bass bow. If the grain is not quite straight, the quality of the thinner stick suffers more; a thicker stick can tolerate greater irregularities.

Elasticity and Density, or Lucchis and Fishes

Good bows need an appropriate degree of springiness or elasticity. There is a way of measuring elasticity: Sound waves propagate faster through elastic materials than inelastic ones. Using this principle, we were able to evaluate the elasticity of our Pernambuco with a “Lucchi Meter”. This small machine sends ultrasound waves through a plank and measures the time it needs to travel from one end to the other. Dividing the length of the plank by the elapsed time we obtained the Lucchi coefficient or score for each piece, which I like to call their “Lucchis”.

We should not believe too much in numbers, but they do give an indication. In my experience, wood with high Lucchis are good for violin bows; wood with lower readings may make very good cello or bass bows.

We evaluated all of the beams and then we decided which beams would become thin planks for violin and viola or thicker ones for cello and bass. It took us a week of sawing.

As that was done, the one thing remaining was to measure the density of the planks.

Density is one of the main factors that influence the sound quality of a bow. I once asked William Salchow, my teacher, what to do with lightweight wood. “Throw it away!”, was his distinctive answer. That may seem radical, but most bowmakers prefer dense wood.

There is a very simple way to measure density. We needed only a bucket of water and a good handsaw. We cut little pieces off the planks and threw them in the bucket. If our piece sank it was good, if it swam it was bad. Observing how fast our pieces sank; we could estimate their density (specific gravity between 1,0 and 1,2).

But we divided them only between “fishes” and “boats”.

Finally, we could divide our planks by density, Lucchi score and intended use (violin/viola or cello/bass). So it came to 24 piles, as we had 4 measures of Lucchis: very good, good, okay and bad. All of them were divided again between “fishes” and “boats”.

About a third of the wood were “fishes”. I think that is quite a normal rate if you buy a big amount of Pernambuco, maybe the rate was even rather good.

That was obviously the wood all of us wanted the most and it was the smallest pile of planks. But we divided each pile in three portions, one portion for each partner.

How many sticks per ton of wood

After that I gave my planks a year of rest. Then I sawed them into sticks. That was another week of heavy work. In the end I had about 300 sticks, same as the other two partners

From my 300 sticks I really liked only about 100 pieces. The others were partly usable, but I wouldn’t have bought them for myself.

A violin or viola stick weighs about 100 grams, so they weigh something like 10 kilos all together.

From the initial 333 kilos, which was my third, there were only 10 kilos of wood I really wanted to use. The other 320 kilos are crap. That is only 3,3% of the initial weight of wood!

I find that pretty sad. If the Pernambuco trees were cut by people who knew the needs of bowmakers, I think the proportion of decent sticks in a pile of beams could go up considerably.