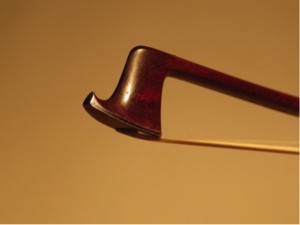 This is a very beautiful German cello bow. It’s not mine; I have it for sale for 25,000 euros. That’s a lot of money for a German bow, but this one is in top condition. And, there are not so many old German bows of this quality around.
Engleder was a very well known violinmaker in Munich who lived from 1807 to 1872. He learned the trade from Jean Vauchel, a violinmaker from who it is said had studied with Tourte in Paris. So there seems to be a direct connection to Tourte.
I am not even sure if Engleder made bows himself. I contacted Josef Gabriel who is one of the best experts on German bows and he didn’t know either who actually made the bows with the stamp And. Engleder. He thinks they were made in Mittenwald, where about 20 bowmakers worked at that time. But we know very little about them.

The influence of Tourte is obvious in this bow, even though there is also a very German twist to it. I think that the bow was made around 1850. That was the time that the German musicians began to appreciate the modern Tourte models with silver mounting. Before that, they preferred the classical style with open frogs. The head is quite high, 28 mm and has a thin silverplate. One pin sits in the front, (as also Tourte did) and that’s why the nose is slightly high, another pin is in the middle under the hair. Tourte would have placed more pins, Engleder didn’t. That’s what makes me believe that he went his own way and thought that two pins were enough, so why use more? German common sense and practical thinking.

The head has very hollow cheeks, something we see in some earlier Tourtes, but in my opinion it is a characteristic of old German bows.
Another German characteristic is that the thinnest point of the stick is not right behind the head (as Tourte did), but about 2 cm away from the head. That gives the bow a slower attack, but it is a good idea if you want to prevent the stick from breaking. Again, I see a practical way of thinking.
The frog is very narrow, only 13 mm wide, while the head is quite wide at 12 mm. That results in the hair having the same width from frog to head, exactly Engleder’s intention. Most French makers of that time would have made a much wider frog and a narrower head.
The frog is very thin in the middle, only 7.5 mm, that makes it very hollow and the foot triangular. Because of this form, the frog rests very comfortably in the hand. The edges are rounded and soft, partly through usage, but the corners on the silver ring are also rounded. That makes me believe it was meant that way.
The maker took into consideration the comfort of the bow in the right hand of the player.

The button is a little bigger than the stick and is made of thick silver. The first ring looks kind of small, because the lip is quite big, but, in fact, all of the facets have the same size: exactly 5 mm each. Germans measured, while most French makers often just trusted their eyes. 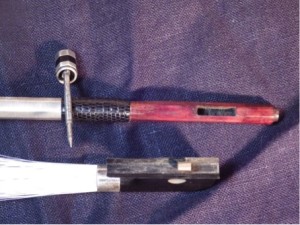 The frog has no silver slide, while French bows of this time usually had one.
That makes me wonder if the bow was made a little earlier than I had thought, it could have been made 10 years earlier, about 1840, the beginning of the time of romantic music. Maybe that makes sense.
The bow weighs 78 grams with a heavy silver winding. That winding is not original, but it works well on this bow. With the heavy silver winding the bow has a balance point at 18,5 cm from the frog. We call that tip heavy.
Still, the bow plays very comfortably, has a deep warm sound and a perfect legato. Maybe, it’s not very springy and is rather on the soft side. But it produces a remarkable full round sound.