I am back from my holidays and want to start a new bow. I have 2 very light bows  and 2 heavy bows for sale, but nothing in between. I need to make a new cello bow, an in-between weight. That is what sells best and I don’t have it in my stock. Here are the thoughts that went through my head while I was working on it.

The model I have used lately is based on FX Tourte and takes some ideas of Eury. That means no silver slide on the frog and a plate on the back of the frog to hold the pearl slide down. The head and the frog are on the high side, the stick is octagonal with a flat coming down on the front of the head.

Nobody else seems to copy Eury. That makes the bow look special and handmade at the first look and I think it makes a lot of sense. 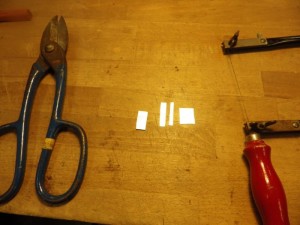 I chose a nice piece of ebony with closed pores and a dark stick with high elasticity and a good density. The stick has some very little knots, but nothing which could give me problems.

The year rings lie in a good angle in the head, pretty much in the playing direction.

It is always a little difficult to start a new bow. This time things went wrong the very first morning. I soldered the silver ring and realized afterwards that I took 0,8 mm silver instead of 1 mm. First I think what the hell, I can still use it, but after a morning cigarette ( forbidden ) I decided that I cannot start the new bow with a mistake. Actually this is not such a bad thing that this  happened.

My teacher Bill Salchow used to say that with every bow something goes wrong sooner or later. And it is true for me, as long 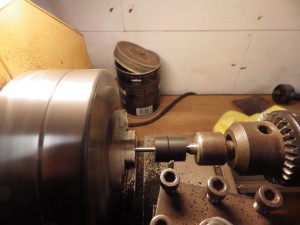 as everything goes well I work faster and faster until it happens and then I get angry with myself, but afterwards I get really concentrated .

So I redid the silverwork with a thicker piece of silver, 1 mm all around as Tourte used to do.

And then I made the button.

It is not easy for me to make a nice button. Most of the Tourte buttons are very beautiful, there is a perfect balance in them.

If you take a closer look and measure the proportions, they are all askew  and still it radiates like a Buddha. I guess this must have to do with the proportion between the silver parts and the black part.

I made the whole button 18 mm long, the black part 9 mm the first silvering 5mm and the second 4 mm.  The first silver part has a rounded ring of about 1.5 mm, that makes it look slightly smaller than the second ring. 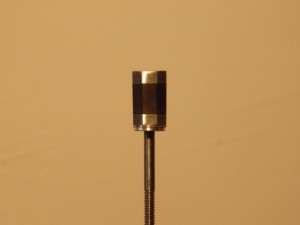 On the other hand, the second ring is a little rounded on the outside to make it feel smooth in your hand.

The goal is to get the flat parts of the octagonal to look about equally long. In fact they came out at about 3,7 mm both.

The whole button looks somehow nicer if it is a little conical, the flats of the outer silver ring have a diameter of 10,3mm, the inner ring 10,1mm and the rounded little ring is 9.8mm.

I would have preferred to leave it at 10 mm, but I can live with it.

The outer ring is hammered octagonal, so you see an octagon with a round mother-of-pearl eye inside. There is this tension between round and octagonal on both sides.

The trick is to make a button look natural, but not boring. Like a piece of Mozart, where he builds up an expectation and then you get it, but with a little unexpected twist. Bow making has a lot in common with composing and playing music. You always have to look forward to what is next, one thing leads to another. For example my button is now 9,8mm wide at the rounded ring instead of 10mm. That means that the stick will be about 9,6 mm at the end. That is about right if the bow is not very fluted. So the button has a direct influence on the character of the bow.

Something  I am proud of are the hidden repetitions of measurements. In this case the button is 18 mm long, the black part is 9mm,  half of it, but you don’t realize this, because the black part is not in the middle. The mother-of-pearl eye in the end of 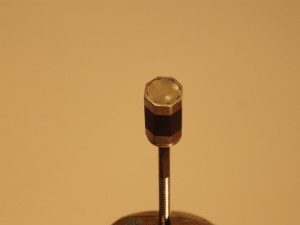 the button is also 9mm, but you would never connect a colorful round pearl with a black ebony stripe. So there is an inner logic in the proportions. You don’t see it, but hopefully you will perceive it on a less conscious level.

I started to make the frog. It will be a little higher than normal, about 22mm from the stick, but not quite as high as Tourte made them. That way there is more distance between the hair and the stick and the player can tilt the bow and has more space to mold the sound.

If the frog is higher it  should be a little longer too. Making it bigger, increases the surface where the index and the middle fingers touch the frog. 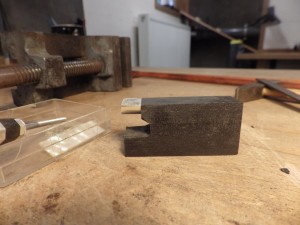 The silver ring is 15mm wide, but made from 1mm silver, that narrows the hair lint down to about 13mm. I like the hair lint not to be too wide, because a wide hair lint mutes the string more than a narrow one.

The silver ring is only 6mm high. I like the number 6,  and a lower ring looks more elegant than a higher one. But then the ebony tong becomes more fragile.

Because of this I make the silver ring a little shorter, 9mm and again I like the number, but it has also a technical reason. With a long silver ring  the tong breaks more easily. In bow making you always have to combine technical and esthetic reasons.

You probably don’t understand all this, but I want to make clear that every measurement is part of a concept and does make a difference for the player.

Making the frog takes a lot of time and nerves. This one is not finished, but most of the work is done. Fitting the silver-plate is the most difficult part, well, difficult, it just takes a couple of hours of scratching tiny bits of ebony away until the silver lies firm on the ebony.

Then I glue it and secure it with 3 pins . The silver ring is 9mm, the mother-of pearl is 30mm and the silver plat is 18mm long. I like that, all exponents of the number 3.

Even the black part on the back of the frog is 12 mm. Nobody ever realizes these measurements, but I have a reason for what I do and I hope that shines through somehow.

Yes, the frog sits on the stick, that is always a nice moment. Working on the stick I like doing much more than the fiddling with the fittings in frog making. 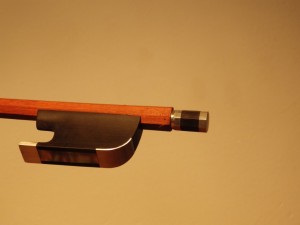 I thought about putting an eye in the frog , but decided not to do it. An eye would make the frog look lighter, but it takes the attention away from the silver plate.

And, this time I have a nice piece of ebony and I would rather show off with the quality of the ebony, than with a mother-of –pearl eye.

In earlier times they decorated a good stick as much as they could.

Today a Zen -like simplicity is fancier and more my style.

For the design of the head I have to keep in mind the angle of the wood’s year rings. They are nearly slab cut, which increases the possibility of breakage.

To avoid that, I leave the head at 27 mm, a good number. Making the head higher would increase the leverage and the forces in the head.

I also leave as much wood as  possible in the area where bows usually brake.

That looks a little chubby, I know. I try to gain back some elegance, making the chamfer a little wider and the cheeks quite hollow. It is still looking quite masculine, but there is nothing wrong with looking masculine, is there ?

I also planed the stick down to a playable strength, the bow is now 73 grams without the hair.

Time to put the hair on ! 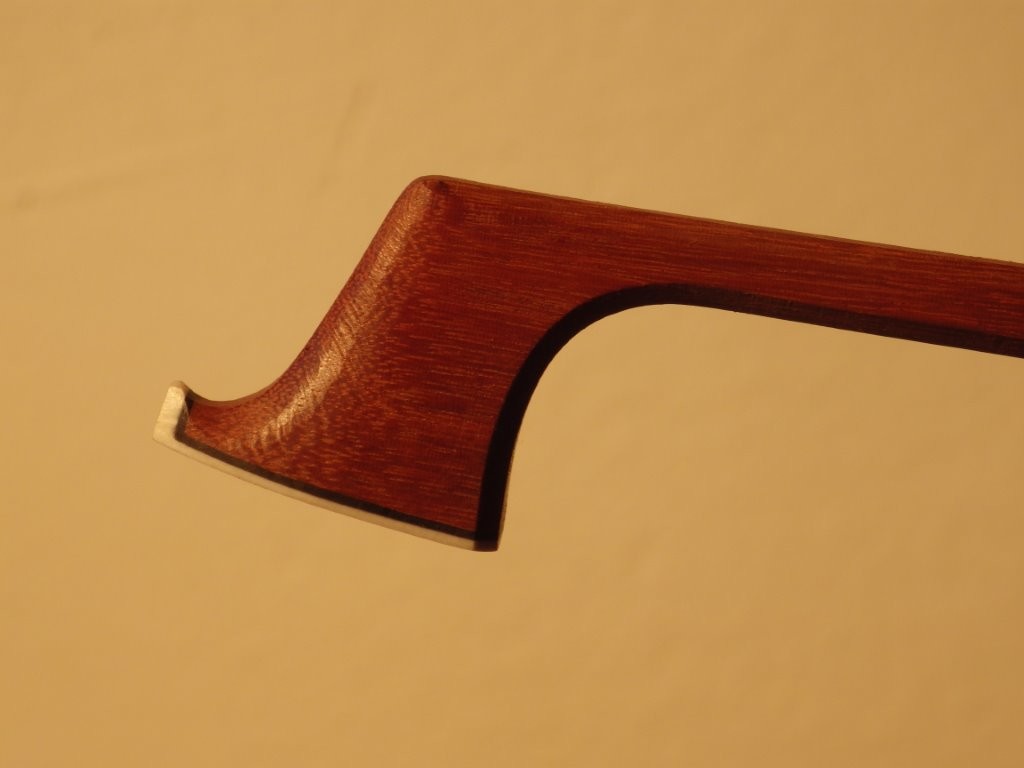 The bow is now 81 grams with the hair on. It stays straight when I put it under tension, so that’s a good thing. But the bow is quite heavy at the tip. Now is the time to give the bow its final character. There are some little irregularities  in the octagonal sides to be fixed and the curve also needs some adjustments. 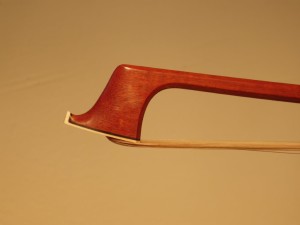 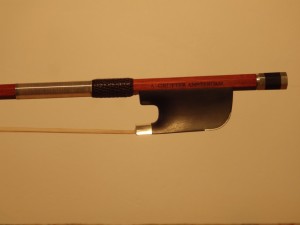 The bow is finished and I am pleased with it. The bow was a little heavy at the tip. So I had to put a silver winding on. Usually I prefer a light silk winding,  as they used in the 19th century. But with the silver winding I got the balance point at 16cm from the frog, which feels good in the hand with a weight of 81,5 grams.

That is about what  most players would like.  The  bow is flexible at the frog and at the tip and has a good bounce. This was because I gave a little more curve in the middle, than most modern makers would do. I saw this same concept  on a nice Kittel I had in my workshop to be rehaired the other day. So, at least I am in good company.

The sound is full and rich, but it is maybe not the loudest bow I have ever made. Now, I bring it to my upstairs neighbor who is very good cellist and can give me some feedback.

Well, Mick played the new cello bow and is very enthusiastic about it. The sound is warm, the bow does everything, but he is not very loud, indeed. What could it be that makes a bow loud, I ask myself. Maybe it has to do with the kind of grip. This bow has an unaggressive grip, it responds a little slowly.