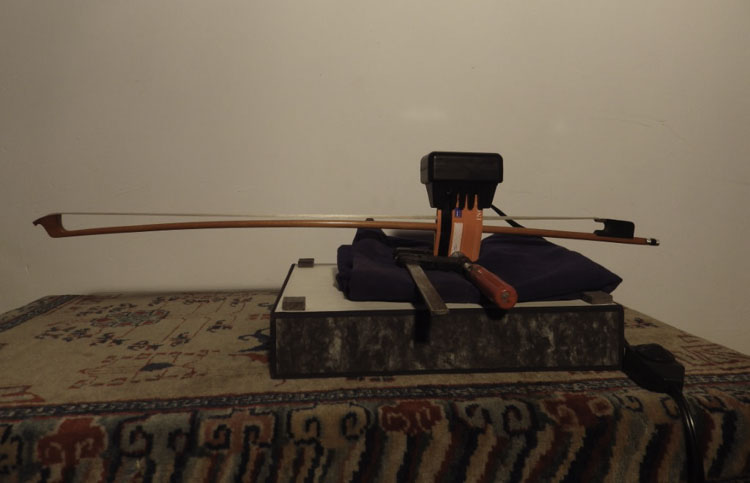 With instruments everybody agrees that you need to break them in.

But nobody can explain what happens when you break-in an instrument. I used to play the double bass, but when I play it now, the instrument sounds dreadful.

Once, my wife, a professional bass player, used my instrument for some time and when I got it back it sounded much better than usual and it was even easier for me to intonate well.

Every violinmaker and every player has had the experience that an instrument has over time changed and gotten better.

With bows it is a little less obvious, but it is safe to say that old bows usually have a deeper sound and a slightly slower reaction. After a rehair the bow has to be played for a couple of hours, but that is probably just the rosin.

Gordan Nikolic told me once, that he doesn’t like his pupils to play his favorite bow, because when he gets it back, the bow doesn’t play as well as before.

That proves that breaking-in a bow does make a difference, maybe a small one, but a sensitive musician can feel it. And, if it is true that an instrument changes by being played, why shouldn’t it also be true for bows?

The mystery is what happens to the instrument when it gets played.

Some people say it is the musician who gets used to the instrument and that could be a part of it, but I think it is not the whole truth.

So I came up with a theory which is true for recorders. When a pupil buys a new instrument, it is the teacher who first plays it for about two weeks. If a pupil would try to do so he could risk completely ruining the instrument.

When a recorder is played it gets very wet on the inside from the spit of the player. Every tone that is played creates a standing wave in the recorder. These waves push the moisture away, so they can ring better. The water dampens the sound. If a recorder is broken-in well, it will allow the right standing waves to come more easily than if the recorder had been played with a wrong intonation.

If we accept this as a fact, we can use the theory also for stringed instruments.

No, you don’t spit into your violin, I know, but there is naturally some moisture in the wood of every instrument.

When you play, the whole instrument seems to vibrate, but on a modern scan we can see that every tone, which is a standing wave, too, vibrates the most in a certain place in the instrument. The vibration occurs where the length of the instrument is a part or an exponent of its length. So all of these standing waves will clear their way and push the moisture away.

Maybe it is not only moisture. There are resins in the wood and there is the lignum which binds the fibers together which could also be moved or become more flexible through the vibrations. I don’t know.

You clamp it onto the bridge and let the thing vibrate for three days on your instrument. Many guitar makers use it, violinmakers are still hesitating. But, from what I hear, it works best on new cheap instruments.

This doesn’t exactly support my theory with moisture and intonation. Because the device sends out just one sound wave. You can regulate it, make it faster or slower, but it is still has only one frequency of vibration. And I don’t believe that the device can replace breaking-in, but recently I have begun use it on my bows.

I am sceptic about the results, up to now, it is very difficult to judge it. When I try a bow once and 3 days later again, I don’t clearly remember how it was before.