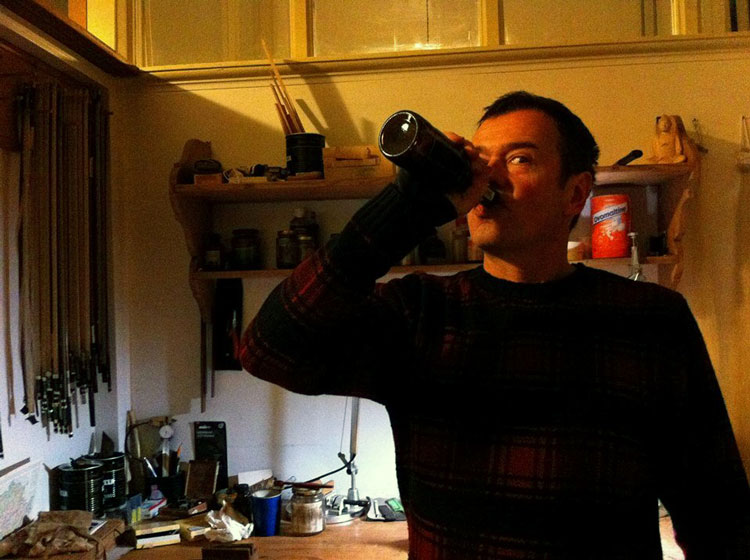 Let’s say I am at a party and meet someone, an attractive female. Why not? It can happen.

Of course, first I have to listen to her talking about herself, but sooner or later she will ask:

And what do you do in life? So I tell her that I am a bowmaker, you know bows, for violins and so.

Only the bows? she asks. Well, yes, but I make all kinds of bows, from bass bows to violin bows, baroque bows and classical bows.

I say, It’s alright, I have a big house on a canal in Amsterdam and another one in Toscany, though that one is rented out.

A.F. looks at me more interested than before and says, Wow, you must be good!

And, where are you from?, asks A.F. I was born in Zurich, Switzerland, Oh! Zurich, she cries, I was there. What a beautiful city.

I try to stop her and say, Well, I didn’t like it so much at the time, so I went to study in Italy, in Cremona to be precise.

Oh, that’s where you learned your trade, says A.F. and makes a face as if she understood something.

Yeah, Cremona, I say and after that I was in N.Y. with a famous bowmaker, William Salchow.

Doesn’t matter, I say, a bowmaker would know.

But how many bowmakers are there in the Netherlands? asks A.F., Maybe about 10, I say and she looks at me as if she caught on. So there are not so many, she says, as if she had explained something significant.

No, there are not that many of us, I say, and, I always try to do it a bit differently.

Oh yes, what is so special about your bows then? Asks A.F. with a doubtful smile.

You can see a bow with your eyes, feel it in your hands and listen to how it plays with your ears. I try to bring these aspects together. I construct a bow as an architect designs a house. All proportions should be in a context. I use the number 3 and the exponents of 3. Wherever I can, I try to use these measurements. Nobody would see that consciously, but I think I bring an inner logic to it that shines through. For the feeling it has in the hand, I leave everything rather rounded and make the surfaces where the hand touches the bow as comfortable as possible. And, I try to bring everything back to the essence, a bit Zen-like.

Kind of, I say, and try to laugh with her, To me it makes sense to strip the bow of everything unnecessary. A bow is a concept as a piece of music, it has to satisfy the expectations of the musician. And, give it just a little twist to keep it interesting. Mozart was the master of that, do you listen to classical music?

A.F.: Well, in fact, I used to play the violin when I was young, but I never knew that the bow was a concept. Maybe, if I had known that before I wouldn’t have stopped.

Yes, if we would have met earlier, I say, maybe…, well, let’s get another beer.